Derby Marketing in the Pandemic

"I know! I'll really promote My Derby Diary in the 2020 season!" ... and we know how well this season has gone. We will eventually be back on skates; you hitting each other and me sending you to the box for leaving your mouthguard in your helmet or cutting your own team mates (my two favourite penalties to issue.)

The derby community seems to have adapted well to social distancing requirements with team workouts on Zoom, pass-the-helmet challenges on Tik Tok, etc. And while these are super important, they are also all 'internal' and not growing your base for when we start up again.

Now is the time to refine your Social Media Strategy (you do have one, right?) across all platforms and make sure your League's SEO approach still works. (SEO is constantly a moving target.) It important to remember that your League is more than just your Facebook Page. I look at a lot of derby websites and too often they are the forgotten piece of the marketing mix. (Hopefully My Derby Diary is also part of that mix.)

And make sure that your Social Media is more than just birthday shout-outs. They are important, but a wall of them is not likely to inspire someone to follow you.

Having well developed channels isn't enough though. You need content. Here are some ideas;

All these should be listed on your Facebook page as sharable Events, on your League website -- and My Derby Diary (of course!). Depending on what the media situation is in your area, you could even promote some of these on local radio or newspapers.

This includes players, on-skate officials and off-skate officials and starts with everything for attracting Fans, but one you've got them hooked there are some next steps to keep them engaged and ready for when new skater intake starts again. I've been thinking of two specific things that I think might have a positive effect on recruitment;

Marketing is all about repeating a consistent message. A lot of Leagues rely on the bouting season as their principle marketing events, but the pandemic has thrown that into chaos. (Yes, even more chaos than a freshie bout with a split pack.) Leagues need to find new marketing levers to pull, and pull them hard else I fear our niche sport is going to be set back years in terms of awareness outside of those of use already initiated.

Oh, and remember, we all win with more fans, even if they end up becoming 'trained' from a League across the planet from you. We need to think globally and not just locally.

Ok. Crossed my fingers and pushed the change I've been working on for the last little while which cross league promotion of Leagues in an Event.

The way it works is that when you create an Event make it for the organizing League and then add the other Leagues that are participating. When you do this, a couple things happen as shown here in Durham Region Roller Derby's bout with Kingston Roller Derby and Forest City Roller Derby; 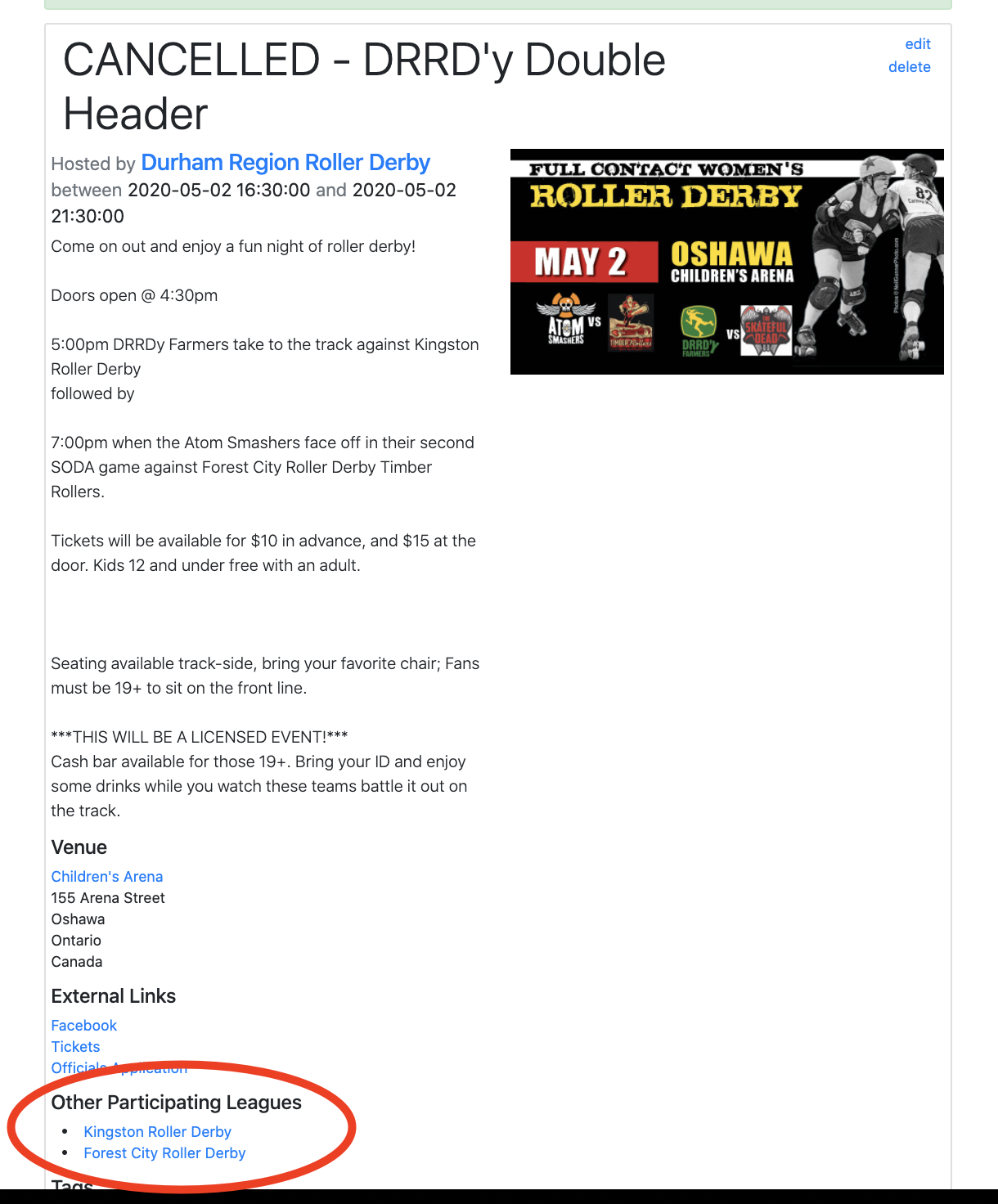 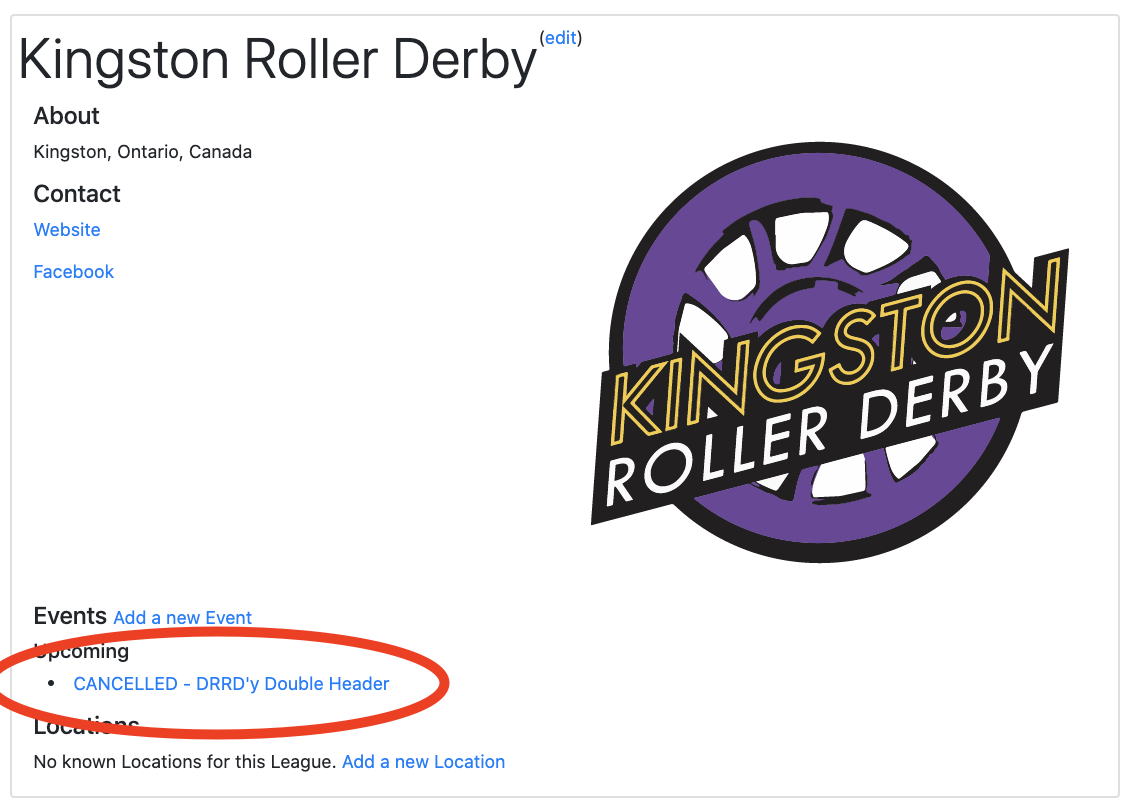 The 2020 derby season pretty much getting cancelled kinda knocked the wind from my 'get people using the site' sails, but starting to get the mojo back.

Nothing visible to report, but I upgraded the framework 2 major revisions this afternoon and have daily backups being done now. Sometimes the important stuff isn't sexy.

Still avoiding having to delete events from the site though. Will have to eventually...

How to find me at a bout near you

Super happy with how this turned out. Thanks Monster Muffin! 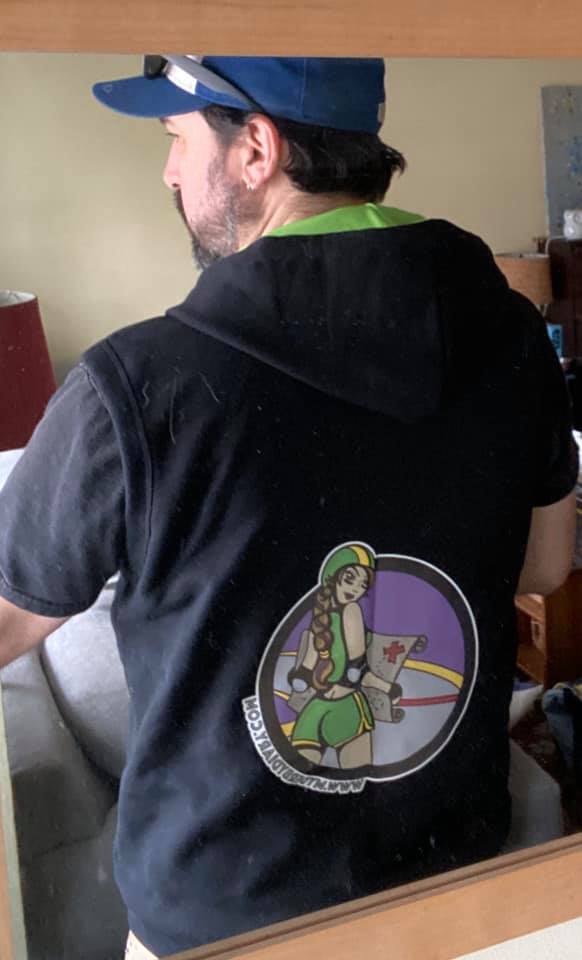 I almost got it done while watching derby on the weekend, but the second half of League Captains just landed. (After a brief outage due to mistyping something in a config file.)

League Captains can now edit Events and Locations that someone has created in the League they manage.

Being able to add Events to any League is fundamental to My Derby Diary, but Leagues also need the ability to update them as information changes -- and now they can.

I've got some non My Derby Diary code that I need to deal with next week, and then I think I'm going to try and change Events so they can appear in more than one League in order to let fans of visiting Leagues see Events. 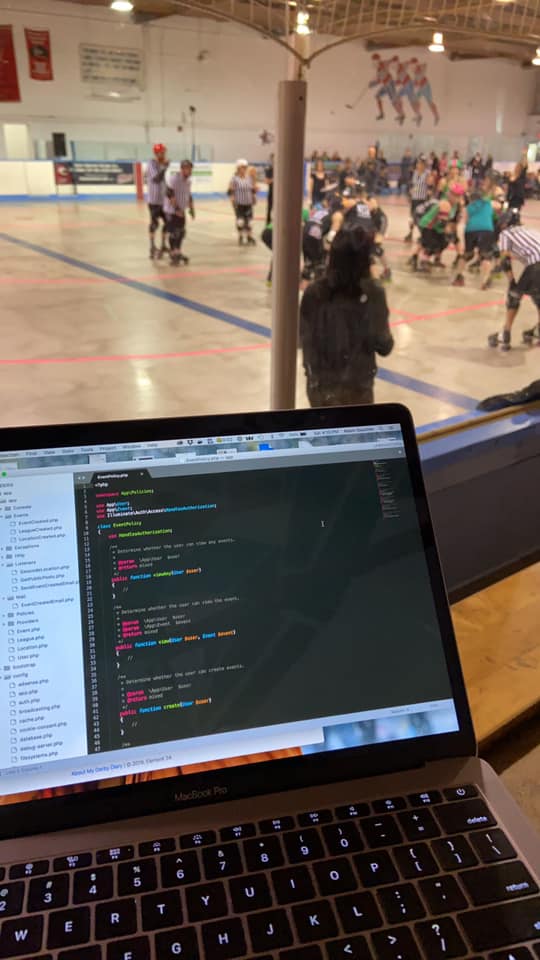 Pushed a bit of code tonight that lets 'League Captains' edit their league details. And I've gone through and given captaincy to the ones who asked or I knew.

As for who was the first to ask to claim their league? Roller Derby of Central Kentucky.

My Derby Diary Leagues can now be claimed!

Claimed Leagues have Stars around their name. Next up ... is granting League Captains the ability to edit their League -- including Locations and Events that someone else has created. 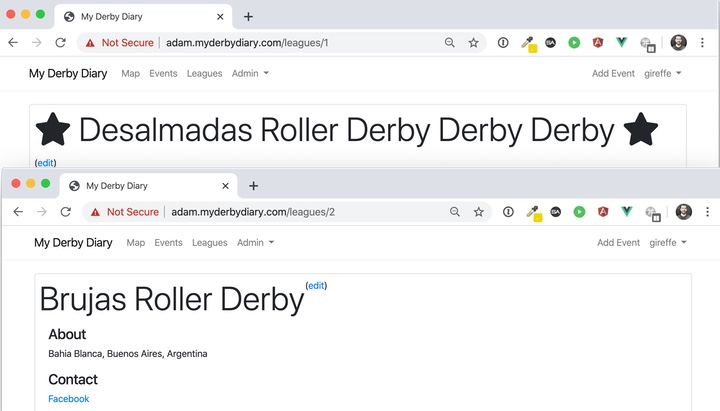 Who is going to be the first League to be claimed? Message to learn more. 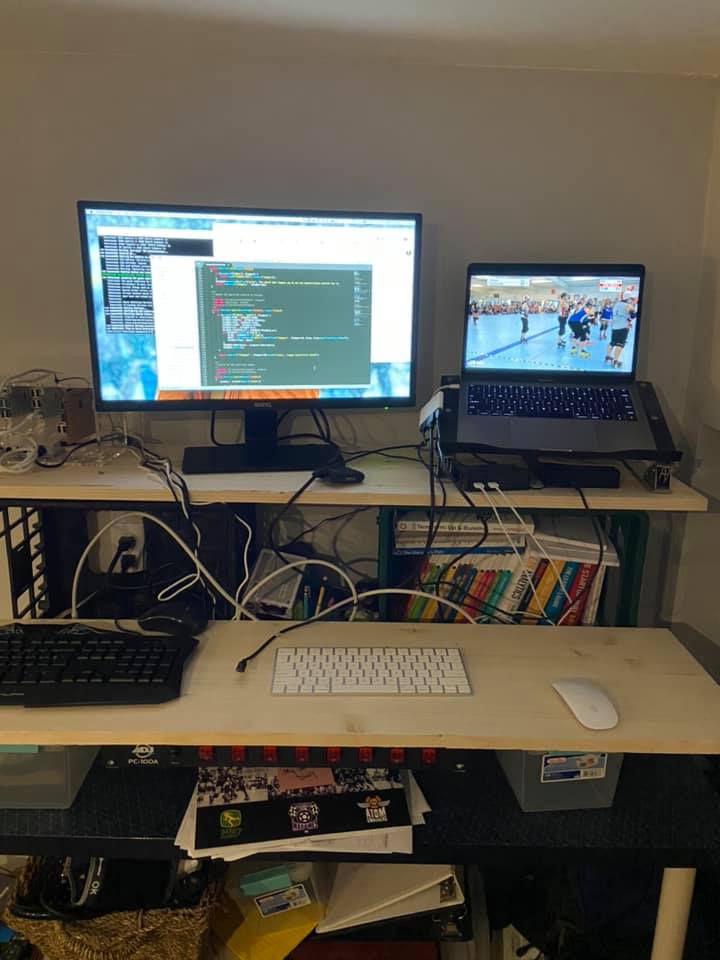 A quick 'avoiding the hard work' update. I've added a 'description' to leagues so they can have a bit of a promotional blurb. (Another obvious-in-hindsight thing.) And in adding Team Black Diaspora Roller Derby I had to also loosen up the rule that Leagues needed to anchored to a place as they, like Team Indigenous Rising Roller Derby are global not just in one place. 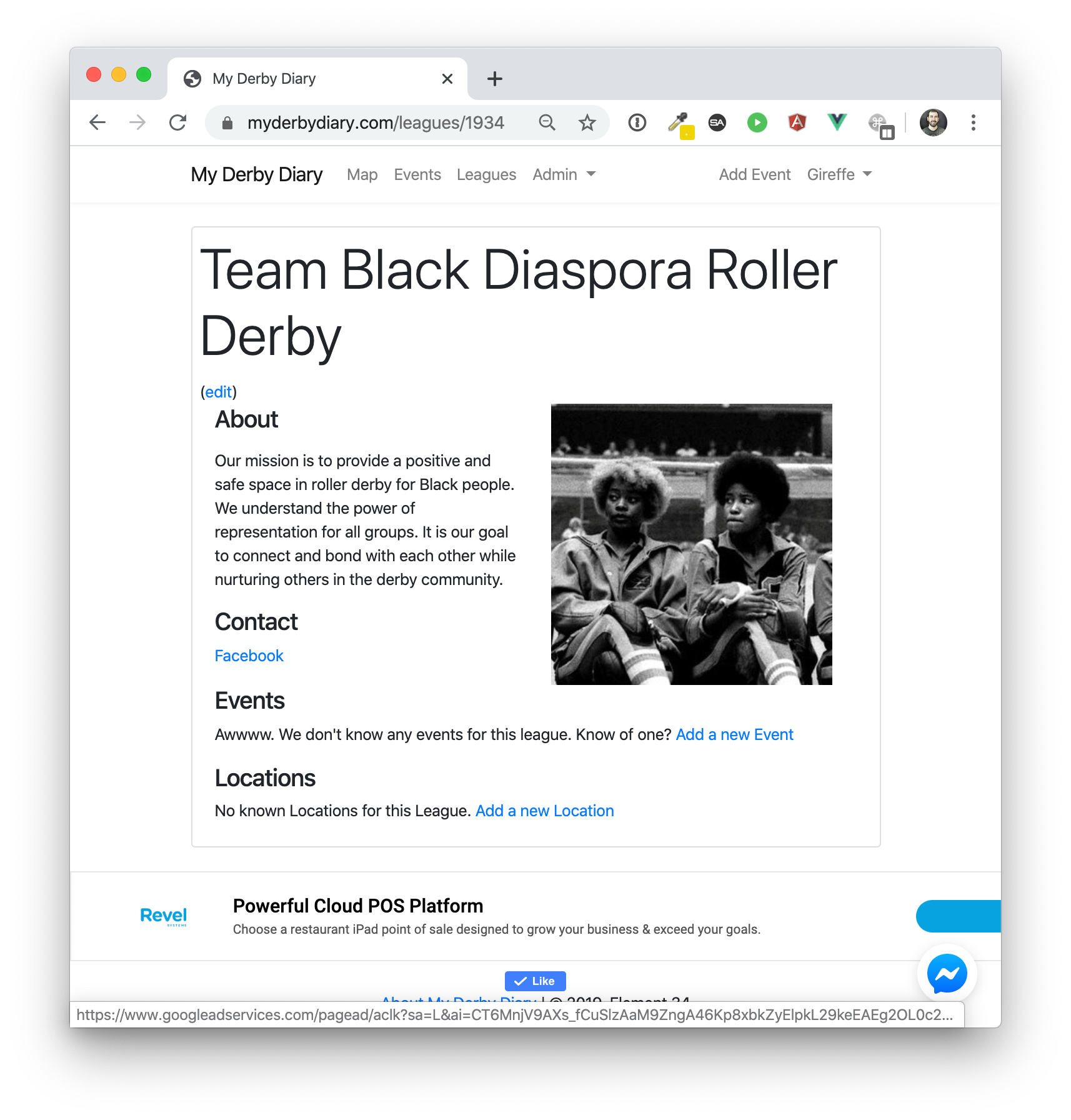 As with the logo update, if you represent a league and want a description or logo added until I get the claim process finished, let me know and I can do it for you.

Quick League tweak while I avoid the hard work I have planned. Leagues can now upload their logo to their profile! As illustrated by Denver Roller Derby's which I did as a production test.

Leagues should be able to claim their page sometime next week to upload their own -- in the meantime, message me with the url for your logo and I can do it. 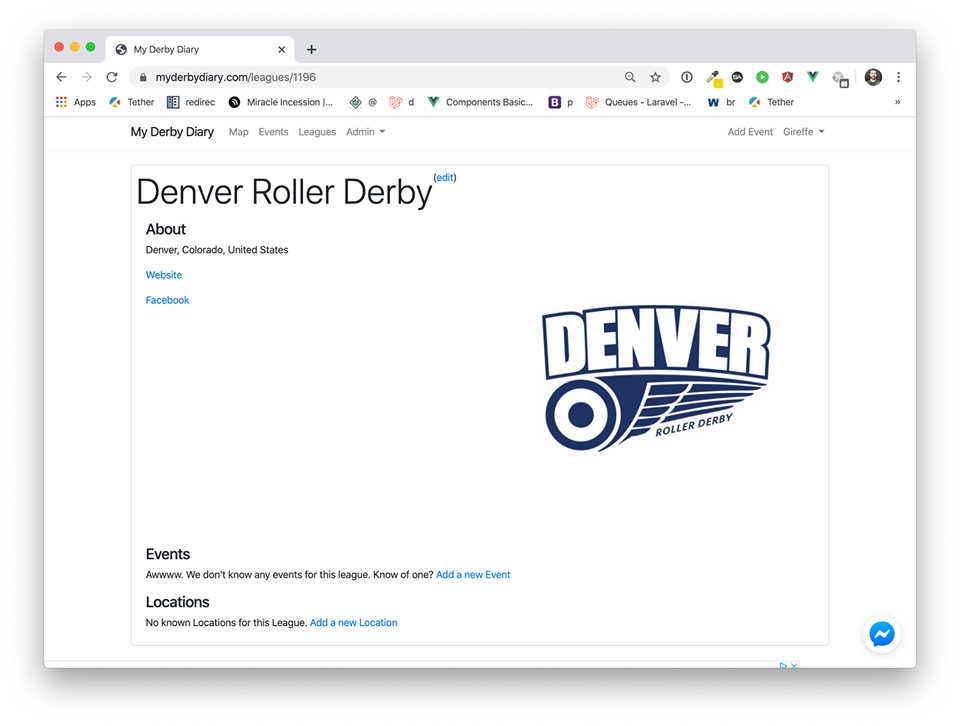 Happy Superb Owl Sunday! Or as it is known around here 'Gireffe juggles kids to hockey rinks at identical times at opposite ends of the city so Stitches can go to Derby'. I'm pretty happy with where Event creation and discovery is now -- which is good as that's kinda the main point of My Derby Diary, so its onto the experience of Leagues.

My Derby Diary will always have the ability for *anyone* to create an event. That is core to its mission. But I also want Leagues to feel a sense of ownership for events that affect them. That means a method of 'claiming' a League needs to be written. Here is my plan for how the process will work;

- The league then tells me either through Facebook Messenger (they message the My Derby Diary Page from a personal account, then I message the League page from my personal account and the League gives me the email address(es)) or email me from their League's domain. Its kinda a pain, but also ensures that people cannot claim rival leagues or a league they have a beef with.

Even Locations and Events created by other users.

If a League [Co-]Captain modifies an Event that was not created by them, the user will get an email notification that it happened -- by a '[Co-]Captain', not stating a specific person. Likewise, if someone creates and Event or Location on a claimed League, the [Co-]Captain[s] will get an email notifying of the change. Of course, this means I need to put a setting on User Profiles to receive transactional emails. And handle if people do not want to receive them which means having some sort Log on all these things. Nothing is ever simple...

Because making User profiles 'Public' ('Private' will always be the default) is not something I've penciled in until later in the year, at no point will the name or email of people be shown. Well, unless it's me doing something, but that should be rare. (I hope.)

I've been thinking this through for a couple months, and I think it's pretty air tight, but what do you think? Let me know of Facebook.